14th Conference of the International Committee for the Conservation of Mosaics, Plovdiv

In the period 24 – 28 October 2022 Plovdiv, Bulgaria became the host city for the 14th Conference of the International Committee for the Conservation of Mosaics (ICCM) “Conserving Mosaics in a Changing Environments. Challenges and Opportunities“.  The event took place at the House of Culture “Boris Hristov” and was organized by the Municipality of Plovdiv under the patronage of the Bulgarian Ministry of Culture, in a partnership with the ICCM, the Balkan Heritage Foundation (BHF) and the Municipal Institute of Ancient Plovdiv. It was sponsored by: the Getty Foundation, the Getty Conservation Institute, the Municipality of Plovdiv, the Municipal Institute of Ancient Plovdiv, the J.M. Kaplan Fund, the Balkan Heritage Foundation and Fulbright Bulgaria. 200 experts on mosaic heritage from over 20 countries contributed to the conference which happened for the very first time in Esrtern Europe and in the Balkans north of Greece. This is the world largest event in the field of mosaic conservation, held every three years since 1977, which gathers the best practices in the field of mosaic conservation, maintenance and preservation through encouragement of international exchange. The presented papers were divided in the following sections: Mosaic in urban environment and shelters; Conservation and management of mosaics; Modern era mosaics, Documentation, MOSAIKON, Case studies. The participants visited the Buzludzha monument with its significant modern mosaics, the Roman mosaics of Stara Zagora and Thracian tombs in the Valley of Thracian kings. The 14th ICCM marked also the 45th birthday of the organization which was celebrated on the very last day of the event.

How did it all start?

In 2015 Roberto Nardi – Director of the Center for Archaeological Conservation in Rome and since 2014 president of the International Committee for the Conservation of Mosaics (ICCM) visited Plovdiv upon invitation from the Balkan Heritage Foundation. During this first visit to Plovdiv, Mr. Nardi saw its potential for hosting an upcoming Conference of the International Committee for the Conservation of Mosaics. In 2017 the Municipality of Plovdiv and BHF invited the entire ICCM board to visit Plovdiv and take part in a one-day symposium “Conservation and Restoration of Mosaics”. In the autumn of the same year during the 13th ICCM conference in Barcelona the Municipality of Plovdiv extended an official invitation to ICCM to host the 14th ICCM Conference in Plovdiv in 2020 which was accepted by the ICCM board. In Barcelona the BHF program director Dr. Angela Pencheva was elected as an ICCM board member and secretary of the board. Unfortunately, due to the Covid19 pandemic, the conference was postponed twice until it was finally held in October 2022. 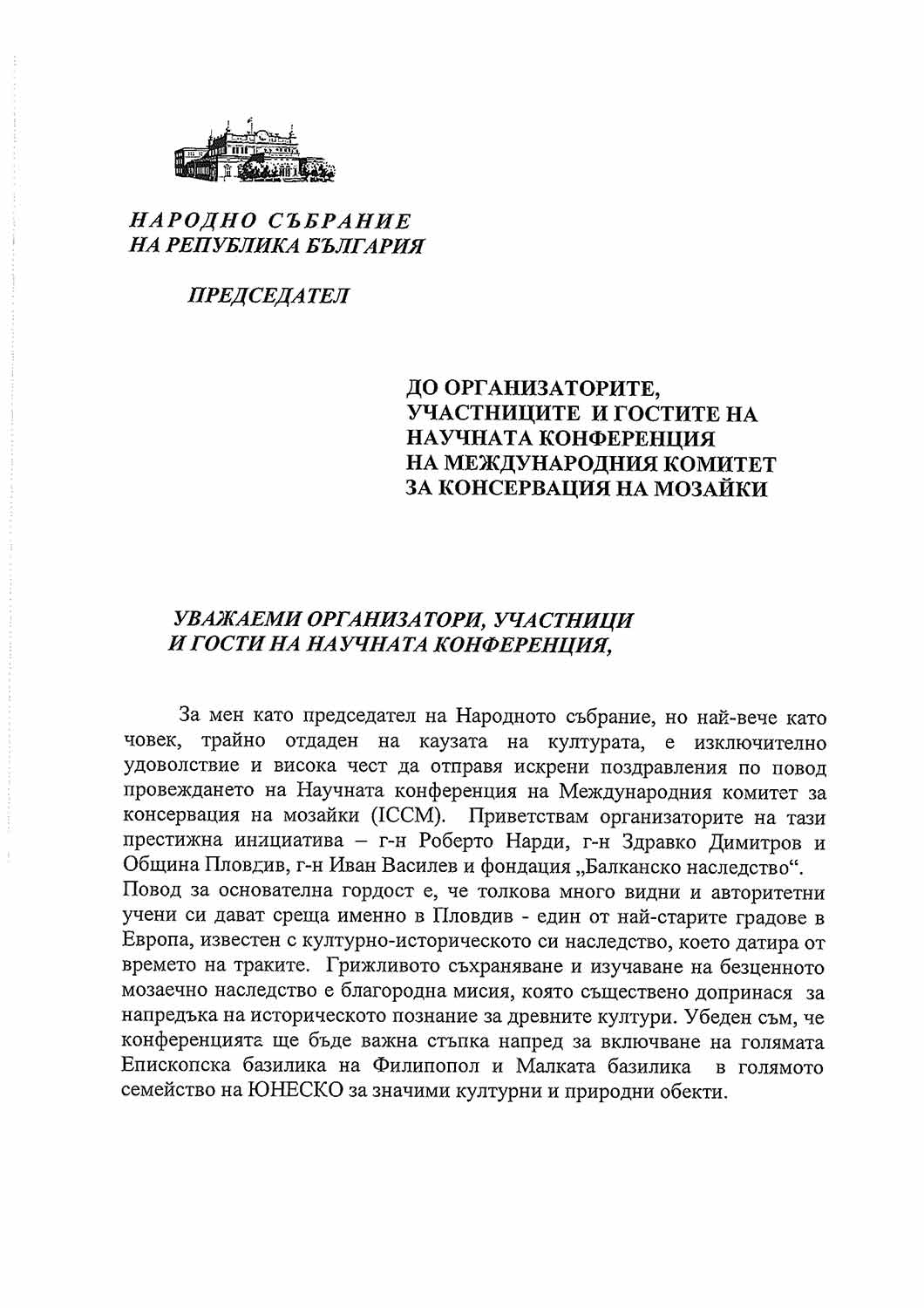 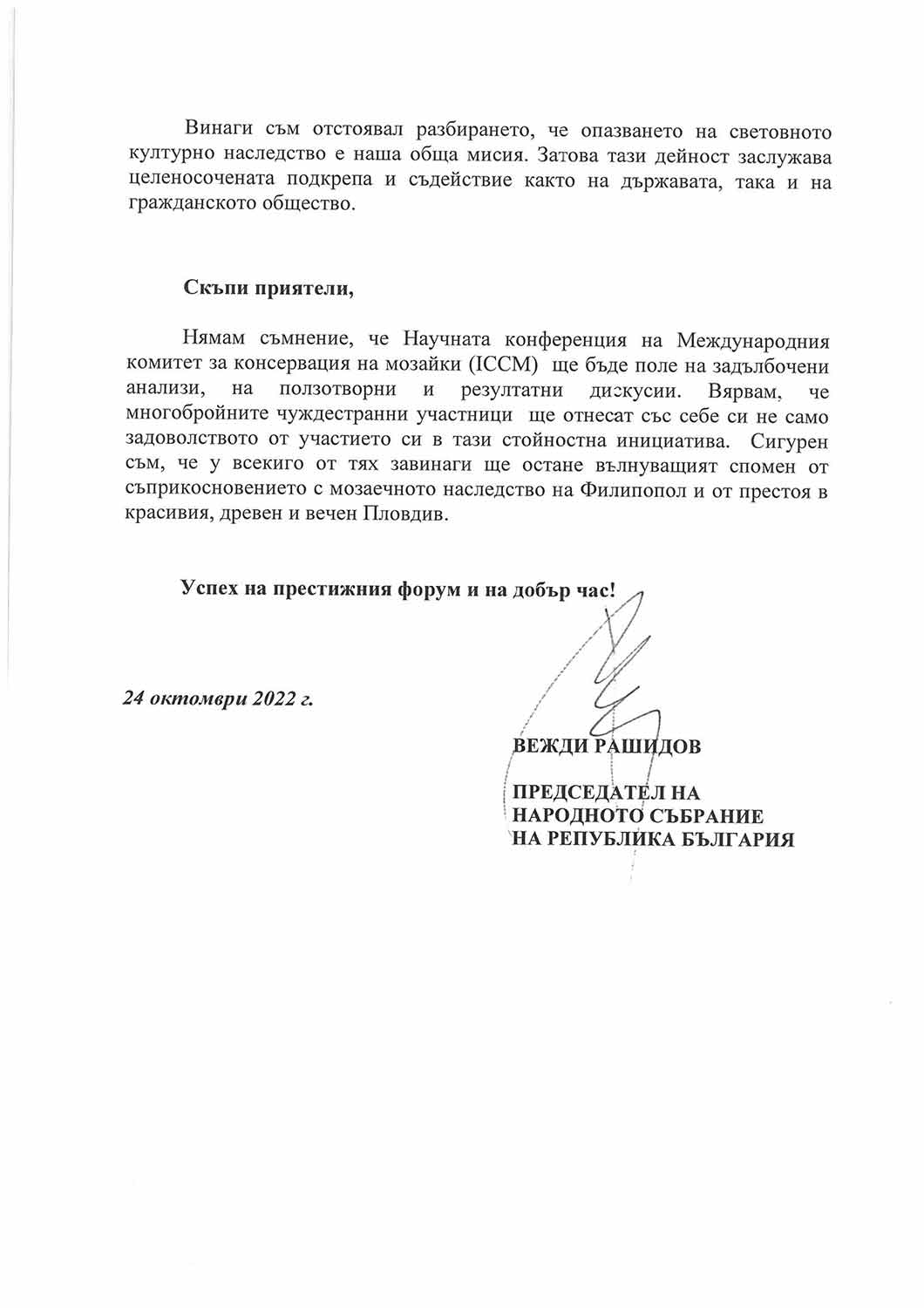 The BHF Contribution for the Conference

The Balkan Heritage Foundation was an official partner of ICCM and Plovdiv Municipality in the conference organization and provided logistical support for the entire duration of the event. The BHF gave an exceptional cocktail for all ICCM members after the official opening of the conference at the House of Culture “Boris Hristov” co–sponsored by Villa Velis Winery. The audience enjoyed the concert of the talented Underground Cello Quartet.  The BHF founders: Ivan Vasilev and Dr. Angela Pencheva volunteered as informal guides during the visits to the Valley of Thracian Kings, the Buzludzha monument and the city of Stara Zagora and presented the richness of Bulgarian cultural heritage.

In the eve of the conference the Balkan Heritage Foundation published the catalog “Ancient and Contemporary Mosaics of Plovdiv” with the support of the Municipality of Plovdiv and displayed two exhibitions dedicated to the ancient and modern mosaic heritage of Plovdiv and Sofia. The exhibition “Plovdiv – City of Mosaics 2022” was on display at the Episcopal (bishop’s) basilica in Plovdiv between 11 October and 30 November 2022 as a continuation of the exhibition “Mosaic week Plovdiv 2021”. Both exhibitions by the Balkan Heritage Foundation were co-funded and organized in partnership with the Municipality of Plovdiv. The “Mosaic tour Sofia 2022”: the latest creation of the Balkan Heritage Foundation in collaboration with the Sofia Municipality and its “Culture” Program featured an outdoor exhibition in the City Garden in front of the National Theater “Ivan Vazov” in the period 18 October – 1 November 2022.

“I was glad and honored to have been invited to participate at the very interesting, stimulating and vivacious conference on the Alexandrovo tomb and its tomb paintings 20 years after its discovery, organized by the Balkan Heritage Foundation and 13 Bulgarian colleagues specialized in Thracian culture and art. Particularly active and meritorious in the organization were the “female trias” Julia Valeva, Julia Tzvetkova, Angela Pencheva and Georgi Nekhrizov. It was for me the third invitation for a conference or congress in Bulgaria – this time unfortunately only in a telematic way (which worked very well anyway) – after the more “intime” Kazanlak Conference in October 2016 and the International Congress of Thracology in Kazanlak in September 2017 when I could visit for the first time (accompanied by several Bulgarian colleagues as Maria Cicicova and Julia Valeva) the Alexandrovo Tomb (the copy) and the modern Museum built near the tumulus of the famous tomb. I really hope that the papers of the two congresses will be soon published! Visiting the impressing Alexandrovo Museum sponsored by the Japanese and participating now at the Conference I remembered with a certain emotion the famous discoverer of the Tomb – the late Georgi Kitov – whom I met almost 24 years ago in 1997 with his excavation team in Shipka near Kazanlak enjoying his hospitality together with the Japanese photographer Mr. A. Suzuki from Tokyo University and drinking a good bottle of Tuscan wine together.

The first part of this Conference was dedicated mainly to iconographic and art historic aspects whereas the second part was dealing mostly with problems related to the technique, conservation and restoration of Thracian tomb architecture and painting. The two sections emphasized the interdisciplinary character of the Conference. Most of the papers were presented by Bulgarian colleagues and specialists of course but thanks to the participation of David Braund (Great Britain), Stephan Steingräber (Germany/Italy), Olga Palagia (Greece), Latife Summerer (Turkey), Antonino Cosentino (Italy), Hariclia Brecoulaki (Greece) and Anjo Weichbrodt (Switzerland) the Conference had an international character too and was very helpful for a scientific opinion exchange between specialists from different fields. Almost all papers were followed by lively discussions.

The number of the painted tombs in Thrace is limited and the Alexandrovo Tomb belongs doubtlessly to the most interesting and important cases offering an almost complete decoration with figural, vegetal and architectural elements and even with a unique graffito and inscription. It dates from the later 4th cent. B.C. which means from the beginning of the Early Hellenistic period when monumental tomb architecture and tomb painting reached a remarkable and partly new akmè not only in Thrace, but also in Macedonia, Crimea, Asia Minor, Alexandria, Southern Italy (Apulia, Campania, Lucania), Southern Etruria and even in Rome using partly similar partly different decorations and iconographic themes. In spite of a certain number of publications related to many aspects of the Alexandrovo Tomb during the last two decades it was time after 20 years for a new up to date and discussion among specialists.

In the first section of particular interest were the contributions of D. Braund on the figure of the naked hunter with the axe, of E. Nankov on the military equipment depicted in the tomb, of J. Valeva on the reconstruction of the (unfortunately very badly preserved) funerary banquet scene in the main chamber of the tomb and of N. Shanrankov on the graffito of the head of a young man in profile and the inscription. Although the idea of a possible “portrait” and signature of an artist was fascinating (and would be unique in Thracian painting) obviously we have to deal here with the head and name of a person perhaps related to a later burial in the tomb and not to the painter-artist. The papers of O. Palagia and L. Summerer offered extremely interesting comparison examples in Macedonia and Asia Minor (Mylasa).

Specially the second section of May 12th was of great interest and innovative character under several aspects such as chemical and physical analyses of pigments and binders, Gas Chromatography-Mass Spectrometry, non-destructive photo documentation, 3D Laser Scanning, geophysical methods of prospection and archaeological surveys. H. Brecoulaki presented a very brilliant paper on the scientific investigation and revisualization with new methods of the famous hunt frieze on the façade of Tomb II (Philipp Tomb) at Vergina, which is actually the most important heritage of original ancient Greek painting.

I remained particularly impressed by the very challenging but extremely useful project of a systematic data base of all Thracian tombs in Bulgaria (and perhaps in the European part of Turkey too) organized by the Balkan Heritage Foundation. D. Gergova’s final speech was partly a “cry” for the – much needed – restoration and conservation of the Alexandrovo Tomb, which unfortunately is actually in quite bad conditions. I am wondering why the responsible Bulgarian National Authorities are not able or not willing to organize as soon as possible the necessary measures for the preservation of this unique Thracian tomb and its decoration cooperating possibly with foreign specialists too. It seems to be that in the former (communist) era the Bulgarian State – of course for ideological reasons too – was more interested and engaged to preserve its archaeological heritage. Let’s hope that this conference and its publication will shake up the Bulgarian authorities and have some positive results!

At the end of my short report I would like to remember Mario Torelli – the famous Italian archaeologist, etruscologist and ancient historian who passed away last September (2020) in Sicily and who had always a very special interest for the Thracian tomb paintings, particularly for the Kazanlak World Heritage Tomb. He had organized in the last two decades several Conferences and Convegni on ancient pre-Roman tomb paintings especially of the Late Classical and Hellenistic period.”