Blog - Latest News
You are here: Home / Uncategorized / The Conservation of The Prehistoric Sculptures of Monteprama, Sardinia,...

During an archaeological excavation in the early 1970s in central Sardinia, Italy, 5000 stone fragments from more than 30 gigantic statues (average height 2.2 m) depicting archers, boxers, warriors and 10 models of prehistoric nuraghe (cone-shaped stone towers) were found. These can be traced to an as-yet undefined period, which goes from the tenth to the eighth century BC.

In November 2007 a conservation program started. It consists of a “new excavation” among the mountain of cases containing the fragments, with the objective of remounting some of the statues and the goal of understanding this unique phenomenon.

Thanks to a three years conservation program, the statues of MontePrama are again a topic of interest.  Funds have been made available for a complete intervention and future museum display, and the conservator-restorers have been given carte blanche to organize programs of information and diffusion that involves the public and young people by drawing them into the project. 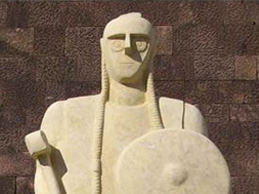 Roberto Nardi received a first degree in archaeology from the University of Rome and than one in conservation of archaeological materials at the Central Restoration Institute, Rome. In 1982 he founded the Centro di Conservazione Archeologica (CCA), a private company carrying out public commissions in the field of conservation of ancient monuments and archaeological sites. CCA is based in a convent located north of Rome where training course are held. He has directed more than 50 projects or training courses in 14 countries, including the Arch of Septimius Severus and the Temple of Vespasian in the Roman Forum, the mosaic at Saint Catherine’s in the Sinai and the wall paintings at the Madrasa Amiriya in Yemen that in 2007 received the Aga Kahn Award for Islamic Architecture. He has published 80 technical articles. Roberto Nardi is president of the International Committee for the Conservation of Mosaics and Kress Lecturer at the American Institute of Archaeology for 2010/2011.

The Roman City Of Zeugma (Turkey) Conservation Project Monastery of Saint Catherine in Sinai: the conservation of the mosaic of the...
Scroll to top